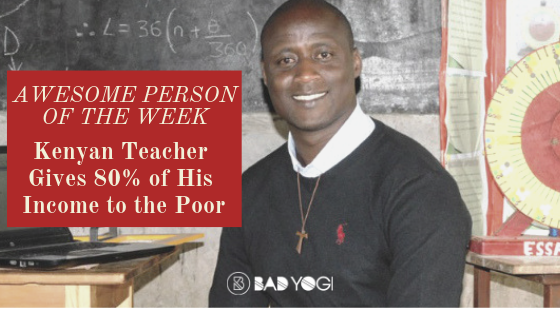 Awesome Person of the Week: Kenyan Teacher Gives 80% of His Income to the Poor

They say a little goes a long way and Kenyan maths and physics teacher Peter Tabichi has proven this to be very true. Although, in Tabichi’s case, he gave away more than just a little.

CNN reports that Tabichi, who is also a Franciscan brother, has made it a priority to give away 80% of his monthly income to the poor in his community. Teaching at a rural school in Pwani Village in Kenya, he is well aware of the fact that the students there come from poor families – many of them are orphans too. Life is hard enough for them as it is and Tabichi wanted to make it better. The school he works at has only one computer, poor internet and the student-teacher ratio are 58:1. It may seem like the odds were stacked against Tabichi from the get-go, but he decided to use it as an opportunity to bring about change.

Tabichi pulled out all the stops – visiting internet cafes and then using the content offline in the classroom. He’s also at the head of the school’s science club and it’s been doing very well – the students are now competing in national and international competitions despite the limited resources they have at their disposal. They’ve even walked away with an award from the Royal Society of Chemistry after launching a project that uses local plant life to generate electricity. The mathematical science team also reached new heights when they qualified for this year’s INTEL International Science and Engineering Fair in Arizona.

Tabichi’s work did not go unnoticed

Tabichi’s good work and dedication to his students did not go unnoticed. Last month, he was awarded the $1 million Varkey Global Teacher Prize in Dubai. It was presented to him by actor Hugh Jackman, who hosted the ceremony. During his acceptance speech, Tabichi told the foundation that the prize does not recognize him, but the continent’s youth. “Every day in Africa we turn a new page and a new chapter. Today is another day,” he said. 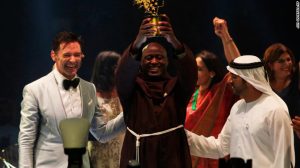 Tabichi’s work is having a ripple effect

The students in Tabichi’s care face far more challenges than just being poor – they also have to deal with food scarcity, drug abuse, teenage pregnancies, and young marriages. Despite all this, the enrollment at Keriko Mixed Day Secondary School where Tabichi works has doubled in just three years time, with many of the students managing to go on to college.

Tabichi is making a massive difference in his community – education is the best gift one can give to someone, especially to those who desperately need to rise above their circumstances. Tabichi is showing the world that it is indeed possible to do so –  you just have to be willing to go the extra mile and have an open and kind heart. His motto for life is simple: “You have to do more and talk less.”