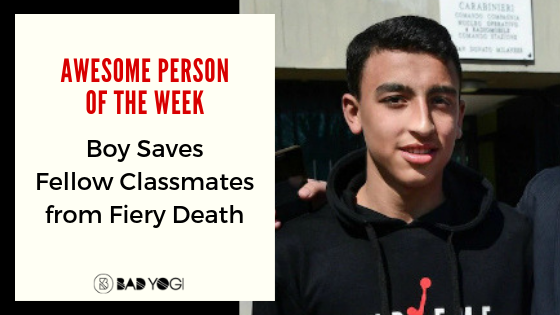 Earlier this week, a young boy saved his fellow classmates and teachers from a dire situation by thinking on his feet and keeping a cool head. 13-year-old Ramy Shehata will be granted Italian citizenship after his heroic act that saved many lives.

Shehata and his classmates found themselves in a terrifying situation

CNN reports that Shehata and his classmates found themselves in a truly frightening situation when their school bus that was supposed to return to the school in Crema, Northern Italy, was hijacked by the driver. He had doused the bus in petrol and threatened to set it alight to avenge the drowning of migrants in the Mediterranean.

He took all the kids’ mobile phones from them, but Shehata managed to convince him that he hadn’t brought his phone with him to school that day. While the driver was distracted, Shehata pretended to be praying in Arabic, while in reality, he was calling his father, who in turn alerted police of the situation. 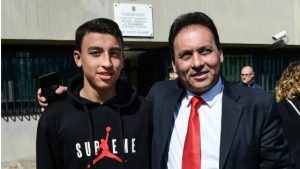 Rami Shehata (pictured with his father) managed to save himself and his classmates from a terrifying situation.
Image: AFP

Shehata was able to give his father the exact location of the bus. Keeping his head down in prayer and looking through the window, he was able to read the signs on the road, enabling police to pinpoint the bus’ exact location. According to police, this was essential for the rescue.

Thanks to Shehata’s quick thinking, no one was harmed

The 51 pupils on the bus, aged between 11 and 13, were all unharmed. Police managed to break through the back windows of the bus to let them all out. This was when the driver made good on his threats and set the bus on fire. Luckily, all the students could be rescued in time.

The Italian Interior Minister, Matteo Salvini, was very impressed by Shehata’s quick thinking and very thankful that he could alert the authorities in time to rescue all of the pupils – so much so that he said he would grant Shehata citizenship. Shehata, who is from Egypt, won’t have to carry any of the costs regarding the process of gaining citizenship. The ministry announced that they will gladly cover it all.

In the meantime, the bus driver has been arrested and is facing charges of kidnapping, attempted murder, arson charges, and resisting arrest.

Keeping calm in terrifying situations can save lives

Had it not been for Shehata’s quick thinking, he and his classmates might not have lived to tell the tale. Not getting panicked and keeping a cool head saved not only his own life but also those of many others. He is indeed a hero without a cape.