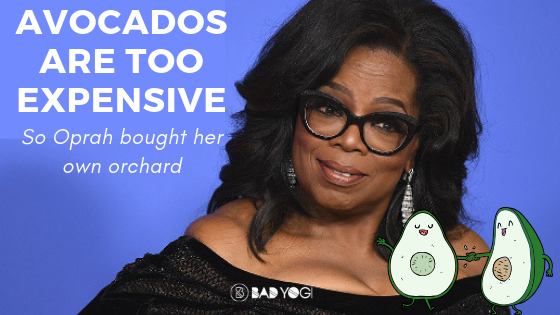 Avocados Are Way Too Expensive, So Oprah Winfrey Bought Her Own Orchard

Oprah Winfrey is undoubtedly the queen of media. What you might not know is that she is the queen of avocados too. Appearing on “The Daily Show” with Trevor Noah last week, Oprah revealed that she has her own avocado orchard. We wonder if she’d mind sharing?

Obviously, there are some benefits to being Oprah Winfrey. Being a veggie lover, she often shows off the harvest from her acreage on Instagram and we’ve all noticed those giant avocadoes among the rest of her bounty. It makes you want some delicious guacamole that very instant, but unfortunately, for normal people like us, avocados come at a price, and a high one at that.

First rose in my garden this year. Signs of Spring. New beginnings. #harvestday

If you don’t want to pay for avocados, buy your own orchard

When Oprah made an appearance on “The Daily Show”, we knew we were in for a treat – Trevor Noah always has a few jokes up his sleeve, but this time Oprah was the one who made the audience laugh when Trevor asked her to tell him something very normal she does in her daily life. Oprah started off by telling him that she travels with her own bread and brings her own avocados with her. Pretty normal, right? But then she dropped the bomb:  “I have an avocado orchard,” she said. That sent Trevor and the audience into a fit of laughter. Not so normal after all.

Once the laughter had died down, Oprah added that she has the orchard because it’s ridiculous to pay for avocadoes, to which Trevor replied, “Which is why you bought your own orchard? Are you kidding me? That’s not a normal story!” We do agree. Normal? No. Very, very cool? Hell yes. What’s really funny is that even Oprah thinks the price of avocadoes is ridiculous. What should the rest of us normal folk say? Since we can’t afford to buy our own orchard (and maintain it), we’ll just have to grin and bear with it.

First rose in my garden this year. Signs of Spring. New beginnings. #harvestday

According to the Hass Avocado Board, an avocado’s average sales price is around $1 and if you want to eat organic, you have to be willing to pay a bit more than that. Imagine what you’ll be paying for an entire tree, not to mention an orchard.

Today reports that Oprah’s orchard wasn’t the only thing that made people crack up. When Trevor asked her if normal things like her phone dying, or the toilet paper running out ever happens to her as it does to everyday people, she replied with a very definite no. Gee, Oprah really has her stuff together, doesn’t she? She did add that the credit for the toilet paper situation doesn’t go to her though – she has a worker replacing it for her and they always fold the newest sheet into a hotel-style triangle. Ain’t that nice? Perhaps we should do that too – it looks really classy after all, even if you do it yourself.

Oprah takes care when it comes to spending her money

She also revealed that while she does send out her laundry to be washed, she never includes her underwear. But she had a very valid reason, saying: “You know why? Because it’s $5 for a pair of panties.” That had everyone in a fit of laughter. Oprah, the Oprah doesn’t want to spend $5 dollars on panties that need to be washed.

If there’s one thing we can say for sure, it’s that even though Oprah has a lot of money, she does take care of how she spends it, and that might actually be the most normal thing she does.