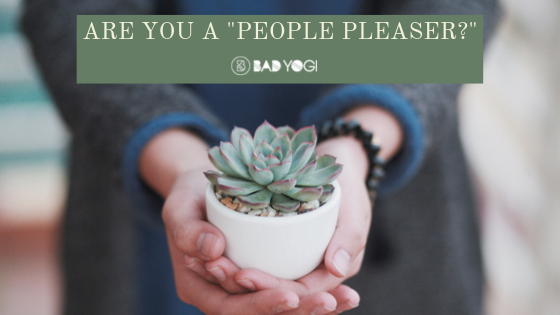 Are You A “People Pleaser?”

I smile at everyone. And, not in the creepy, “why so serious?” Joker way, just a polite, acknowledging other people’s presence in the world, normal smile. However, in the locker room at work the other day I smiled at a girl who, rather than showing an equally nice gesture back, looked at me like Regina George. I felt as if I was back in high school when everyone used to call me “quiet” and “shy.” I felt inadequate, as if I was somehow confirming to her that she was above me, somehow cooler, better liked, and that I should bow down in her presence like she was the Queen of England.

After living in Netherlands for a few years, and traveling to many other countries, I’ve come to realize that my overly friendly, extremely polite, constant “how are you’s?” as a form of greeting were all part of what other cultures deemed my innate “American-ness.” I smile and act friendly to strangers, people who scowl at me, people who bump into me, literally everyone, no matter how they treat me. It’s the kind of behavior that makes European people suspicious and/or feel sorry for me. However, being American really has nothing to do with it.

My dad is the definition of a people pleaser. He smiles at everyone (just like I do,) but he also puts his own needs behind those of even strangers. He makes an extra special effort to stay out of the way, to never impose, to never ask for what he needs. For example, if he has dinner at someone’s house and they offer him coffee, his voice gets all high pitched and he responds, “no, no, no, I’m fine! I’m good!” It’s as if they’ve just offered to fly to Colombia to search for coffee beans in the jungle to bring back and make just for him, he takes it as such a big imposition. I cringe at that behavior not because I’m embarrassed but because I recognize it in myself. I learned from my dad’s behavior to act like I don’t have needs, that other people’s feelings come first.

I make an effort to not take up space in the world. I take up so little space that I’m bumped into frequently, and for some reason, I’m always the one apologizing. As if I need to say sorry for existing in the world because I might have been in someone’s way. In the times we live in now, many might see this as a feminist issue. As women, we’ve frequently been taught to talk softly, take up as little physical space as possible, not speak up, and at times act like we’re a plant used as decoration in office meetings.

In fact, compared to men, women take up so little space in the world that the term “manspreading” became a thing. The Oxford Dictionary describes it as, “the practice whereby a man adopts a sitting position with his legs wide apart, in such a way as to encroach on an adjacent seat’. In 2015, Mic created a video in which women rode the subway while “ladyspreading” to see what would happen. Unsurprisingly, the woman was subjected to a lot more stares and annoyed glaring from other passengers than men would be.

While the idea of naturally trying to take up less space in the world just because I’m a woman makes a lot of sense to me, it feels like a lot more than that. I don’t believe that smiling at others and acting extremely polite even at my own expense is something I do just because I’m female, and my dad is a good example of this. It feels more like an ingrained personality trait that shows a deep level of insecurity on my part, and I believe so many other people share this as well. Not only does constantly putting yourself behind other people show your feelings of inferiority but it shows others that you don’t believe yourself to be of value to the world, that who you are, and the space you take up is in the way of other, more important people.

In a 2010 article for Psychology Today, Amy Morin writes, “For many, the eagerness to please stems from self-worth issues. They hope that saying yes to everything asked of them will help them feel accepted and liked.” She continues, “Many people-pleasers confuse pleasing people with kindness. When discussing their reluctance to turn down someone’s request for a favor, they say things like, ‘I don’t want to be selfish,’ or ‘I just want to be a good person.’ Consequently, they allow others to take advantage of them.”

This issue can affect one’s life at every single level, and for me it has even become a problem in my career. As a writer, I’m required to pitch various publications every week in order to get work, however I find that my insecurity and fear of rejection takes over at every turn. While other writers send hundreds of pitches, playing the numbers, I have a hard time getting out even a third of that for fear that I’m wasting my time, and nobody will like my ideas anyways. It’s a fear of sharing my writing with the world, a fear of taking up space really.

I believe somewhere deep down we all have a little bit of a people pleaser in us, whether it be constantly saying sorry even when someone else bumps into you, or feeling highly insecure in social situations, wanting nothing more than to be liked by everyone. We focus outward, constantly looking to others for cues that they accept us, that they find us worthy, and likeable, funny, charming, and attractive. At times, it can feel like you’re on a first date with the entire world.

The next time a situation comes up where you feel the need to take up less space, whether physically or emotionally, asses your own reaction, you might be surprised at the insecurities you have lying just below the surface.