If you’re a huge sports fan, you might know NBA all-star Andre Iguodala. He’s been in the news lately for backing the increase of taxes on the wealthy. Many raised their eyebrows at this because Iguodala is a millionaire himself, but according to Yahoo Finance, he doesn’t really care about having a lot of money, and would rather see it used to do some good. On top of that, it’s also been revealed that Iguodala loves incorporating yoga into his everyday workout routine. What’s not to love?

Andre Iguodala wants to make the world a better place

In a recent episode of “Influencers with Andy Sewer”, Iguodala, who is also an entrepreneur, with investments in companies such as Facebook, made it clear that he’s willing to give away a chunk of his wealth if it meant that it could make the world a better place.”If we can find ways to stop abusing the earth with pollution and overeating and obesity and diseases and cancer, and if you have to take a chunk of my wealth, I’m all for it,” he said.

Iguodala knows what it’s like to have little. He grew up in Springfield, Illinois, and saw first hand what poverty and segregation look like. He describes these circumstances in detail in his memoir The Sixth Man that was recently released. “The black section of Springfield was not an economically strong place. Unemployment was high, jobs were scarce, and people struggled,” he writes.

Knowing how much it took to get to where he is today, Iguodala was more determined than most to keep his game strong when he approached what is seen as basketball old-age. He is currently 35. Yeah, not old at all, but the sports industry isn’t all that forgiving. According to The Mercury News, a few years ago, when he realized that he was approaching an age that is seen as “old” in basketball, he went to see the Warriors’ head performance therapist Chelsae Lane and asked her about incorporating yoga into his training. He asked whether she knew anyone who could help him, and as it turned out, she did. Lisa Goodwin, who is the Warriors’ senior director of corporate communications, also happened to be a yoga instructor for Core Power Yoga in Walnut Creek.

Goodwin has previously taught yoga to other Warriors, but none of them took the practice as seriously as Iguodala. He was so thankful for Goodwin and yoga that he actually thanked her by name at the NBA Finals victory parade in 2017.

Taking care of mind and body

Iguodala had done yoga before he started taking classes with Goodwin, but when he finally took it up permanently in October 2016, it was because he wanted to do it as part of a body maintenance program. Iguodala seems to really enjoy the practice and all its benefits, saying, “It’s to keep my sanity. That’s more helpful than anything.” We can all relate.

Goodwin is also really impressed with him, saying that he easily manages to get into poses exactly as she instructs him. “His body awareness is incredible. Incredible. So I can cue him into something, and it could be a pose he’s never done before. And when we do it again, he’s in the pose exactly how I asked him to be.” Is there anything Iguodala can’t do?

Even though Iguodala is very modest about his yoga practice, a video diary he did for TNT showed how he flawlessly moved into a perfect Astavakrasana – better known as “eight-angle-pose” to us Bad Yogis. 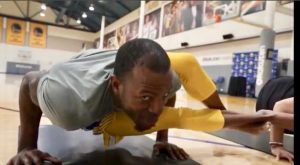 Warriors veteran Andre Iguodala began practicing yoga a few years ago as a
way of prolonging his career. Now, he’s one of several players who swear by
the mental benefits of yoga.
Image: TNT

Practicing mindfulness is important to Iguodala

As with many of those who practice yoga regularly, Iguodala found that the mindfulness that came along with it is what’s really amazing about the practice: “It’s the mental training. Yoga helps me with basketball, but it helps me outside of it more than anything.” He also says that he regularly asks his teammates to practice with him. 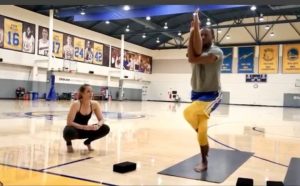 Iguodala fell in love with yoga and now makes it a part of his exercise routine.
Image: TNT

When you really think about it, basketball could easily become like a moving meditation if you approach it with mindfulness, which seems to be exactly what Iguodala is doing. There’s a reason why he’s still around – and thriving.

He’s got some wisdom too

Not only is Iguodala a massive inspiration to aspiring professional basketball players and yogis out there, but his heart is also in the right place. He realizes how blessed he is to be where he is today and in so many words said that he doesn’t really care about the money he makes. He doesn’t go to great lengths to spend it either. That’s probably one of the reasons he’s so eager to back the increase of taxes on the wealthy. He knows it’s not about the money – it’s about what’s inside your heart. When asked about his wealth on the show, he replied that he’s not wealthy, he’s simply blessed.

“I’m not wealthy. Wealthy is when you can’t lose it. I am fortunate and blessed. And I don’t even spend the money. Like, I don’t really enjoy the money. So if it could go to something that helps a great cause or causes to make us a better world, then I’m for it.”

His advice to those trying to make their own dreams come true is simple: “Embrace challenges. Be present. Be mindful. Obstacles are put in front of us to make us better on the other side.”

Iguodala told Andy Sewer that he used to have teachers who told him he’d be a failure, but he tried to surround himself with the right people and make himself aware that he is good enough. It all paid off in the end. Iguodala is truly a stellar example of what can be achieved if you have an open mind and heart, as well as true determination. We’re so glad that he’s part of the yoga community too. Over here, there’s no such thing as too much inspiration.

Iguodala has found that yoga helps him to practice mindfulness in every aspect of his life, including basketball.
Image: Kent Katich