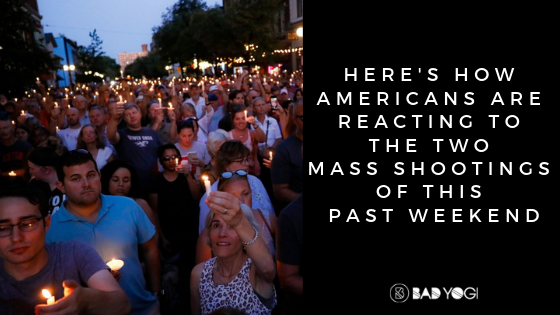 This weekend was anything but relaxing for American citizens. Two back-to-back mass shootings took place in a matter of hours. According to Today, 29 people have been killed and 53 injured. These events shook the nation, and now people are coming forward on social media to admit that they no longer feel safe anywhere. We don’t blame them.

Two mass shootings happening within hours of each other

According to BuzzFeed, the first shooting took place on Saturday in El Paso, Texas, at a Walmart store. This shooting, which was an apparent act of domestic terrorism, killed at least 20 people while injuring 26. The gunman is currently in police custody. Before US citizens could quite process these events, another mass shooting took place in Dayton, Ohio on Sunday morning. Nine people were killed and more than 27 got injured in the heart of Dayton’s Oregon District. According to CNN, Police responded within a minute, and the gunman was killed in the process. One of the victims was the gunman’s sister. 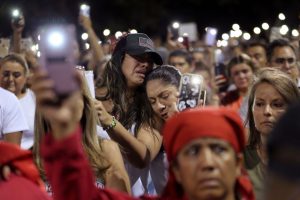 Mass shootings have increased significantly across the US, despite the urgent and desperate calls from citizens to pass stricter gun laws. Just last week, another shooting took place at the popular Gilroy Garlic Festival in California. Three people were killed. Then almost 30 people were killed this weekend. What madness is this?

American citizens admit that they are scared

American citizens took to social media to voice their fears over the ever-increasing amount of mass shootings that are taking place across the country, admitting that they “don’t feel safe anywhere” and feel like they have to be on constant alert whenever they leave their homes in case someone decides to open fire on them. No one wants to live in fear, but it seems that Americans are past the point of being able to ignore the constant danger of gun violence that seems to follow them everywhere. 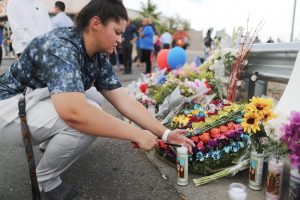 18-Year-old Steve Reveles from Oregon expressed his feelings of anxiety over recent events on Twitter, saying that his anxious thoughts are “just getting worse”. He wrote, “I’ve kinda had this fear for a while but it’s just getting worse because they’re happening more frequently and who knows where the next mass shooting is going to happen or how many are going to happen? Am I safe anywhere?”

Many shared their feelings of fear and anxiety on social media

Many others echoed his thoughts, admitting that they have changed the way they navigate public spaces in case a mass shooting should take place. Some even admitted that they had an escape plan for places they visit regularly.

Whenever I'm in a public space, I think about what would happen if a mass shooting broke out. It's a constant, low-level anxiety that follows me everywhere. I wonder if it's just me. I don't think it is.

Some, like 43-year-old Jes Karakashian of Rochester, admitted to BuzzFeed that she sees a therapist to deal with her fear surrounding mass shootings, since she’s been in that situation before when she was still in school.

“In 1992 a student shot a teacher in the face at my high school. I was in class two doors down. When I lived in Denver, I watched Columbine happen in real-time on the news. The Aurora Century theater is a theater I frequented years before the shooting there. Several months after Sandy Hook — which was 20 years to the day of the shooting at my high school, by the way — I sent my eldest to kindergarten, where on the first day of school there was a lockout because the police were looking for a man who had shot his girlfriend in Rochester the day before. I’ve never been more terrified in my life for my child’s safety.”

One person admitted that they left a movie theater early because it was too packed and it made them feel unsafe.

Some famous personalities shared their fears too, like pro wrestler Brandi Rodes. She admitted that she has a specific spot she sits at every Sunday in church, because it has the best exit route in case someone should open fire. She added that she wants to normalize these kinds of thoughts and behaviors, but that all the mass shootings taking place make it hard to do so.

Every Sunday I have a spot I HAVE to sit at in church. I’m insistent on it because it’s my best route to exits Incase someone comes in and opens fire. Ive tried to convince myself to stop doing this. 2 mass shootings in 24 hrs. What a nightmare we are living in.

Some admitted that they don’t feel safe anywhere anymore

Others said that the series of shootings that have happened in just one week made them feel unsafe to the point where they don’t even feel safe leaving the house or being in any kind of public space.

There are so many shootings I don't feel safe going anywhere in public anymore. How many shootings do we need to prove that something needs to be changed???😓

DUDE. It’s at the point where I don’t feel safe anywhere man. 2 mass shooting in one day? Something has to happen. https://t.co/MD2iO8lD6m

After today, I don’t think I’m ever going to feel comfortable or safe going anywhere

I don’t even feel safe going anywhere anymore man. When are these acts of terrorism and violence going to stop?? Swear it just gets worse and worse. Im losing faith in humanity, I hope everyone is safe and careful next time they go out.

Nan Whaley, Dayton’s mayor, said on Sunday that she understands these sad new realities. She addressed the shooting in a press conference, admitting that there aren’t really any places left where people can feel absolutely safe.

“These senseless acts of violence that occur have been happening anyplace, and I don’t mean to scare people, but frankly we’re at a situation now in our country that  – these are so random, there’s no place that you can say, ‘Oh I just don’t want to ever go anywhere.'” 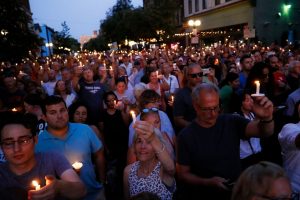 The people of Dayton gathered for a vigil on Sunday to honor those who had died in the mass shooting early on Sunday morning.
Image: John Minchillo/Associated Press

How many more times does this have to happen?

If there’s one thing all Americans can agree on, it’s that they don’t want these fearful thoughts to become the new “normal”. They don’t want to live in fear, they want lawmakers to protect them. More cries to reform laws on gun control resounded on social media over the weekend. The question is, will the government finally start to take note of the fact that this is a serious problem that needs immediate attention, or will all the cries for change once again be met with Tweets filled with “sending thoughts and prayers” from those who are supposed to prevent these kinds of things in the first place?

What are your thoughts on what’s currently happening in America with all the mass shootings? Drop them in the comments.