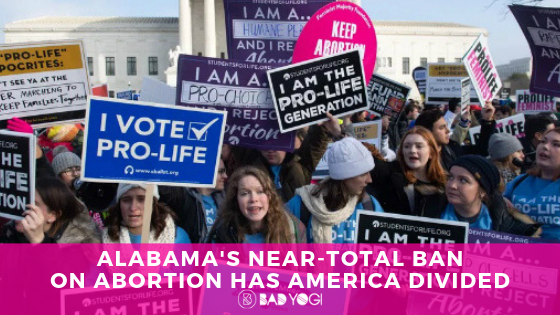 We can all agree that life is precious in all its forms. We can also agree that women should have full jurisdiction over their bodies. Then we get to the issue of abortion, and there’s a division. This week has seen Americans in an uproar after a controversial abortion bill was signed into law on Wednesday by Alabama Governor Kay Ivey. This new law means that doctors who perform abortions could face a lifetime in prison. But what exactly does this new law entail and why is everyone so divided on it?

CNN reports that the new law does not just ban abortion performed because of unwanted pregnancies, it also bans abortion for rape and incest victims. While Democrats introduced an amendment to exempt these victims from the new law, the motion failed on an 11 to 21 vote. The only cases in which an abortion would be legal is if the “unborn child has a lethal anomaly”. This means that women who are victims of rape and incest will be forced to carry a child that will remind them of that horrible moment.

Governor Kay Ivey took to Twitter on Wednesday to announce the signing of the new law.

Today, I signed into law the Alabama Human Life Protection Act. To the bill’s many supporters, this legislation stands as a powerful testament to Alabamians’ deeply held belief that every life is precious & that every life is a sacred gift from God. https://t.co/DwKJyAjSs8 pic.twitter.com/PIUQip6nmw

Enforcing the law may prove to be difficult

Ivey admitted that enforcing the new law may be difficult because of the Supreme Court’s Roe v. Wade decision that legalized abortion in all 50 states in 1973, but added that it is time for the court to revisit their decision.

“No matter one’s personal view on abortion, we can all recognize that, at least for the short term, this bill may similarly be unenforceable. As citizens of this great country, we must always respect the authority of the U.S. Supreme Court even when we disagree with their decisions. Many Americans, myself included, disagreed when Roe v. Wade was handed down in 1973. The sponsors of this bill believe that it is time, once again, for the U.S. Supreme Court to revisit this important matter, and they believe this act may bring about the best opportunity for this to occur.”

People across the country were outraged at the news and social media was soon flooded with Democrats and celebrities raising their voices to oppose the new law. Former Democratic presidential nominee Hilary Clinton also let her voice be heard, saying that the bill is an example of “appalling attacks on women’s lives and fundamental freedoms.”

Celebrities used their platform to voice their opinion about the new law, and most seemed to be against it.

take a look. these are the idiots making decisions for WOMEN in America.
Governor Kay Ivey…SHAME ON YOU!!!! pic.twitter.com/WuAjSVv6TH

This is absolutely unbelievable. If you’re not worried about roe v wade, you’re not paying attention. This is why voting matters!! https://t.co/gZ5lrj7tQ1

#AlabamaAbortionBan #Alabama #AlabamaSenate #NoUterusNoOpinion #PlannedParenthood #ProChoice I love you Alabama prayers to all women and young girls here are my thoughts: pic.twitter.com/LqmVyV8qsA

Other celebrities opened up about their own experiences with abortion, saying that they wanted to put it out there to make people understand why it’s necessary that the new law is not passed.

1 in 4 women have had an abortion. Many people think they don’t know someone who has, but #youknowme. So let’s do this: if you are also the 1 in 4, let’s share it and start to end the shame. Use #youknowme and share your truth.

In 2012, I had an abortion. It was one of the hardest decisions I’ve ever had to make. I still think about it to this day. But these truths do not make me regret my decision. It was the right choice for me, at that time in my life. I have not a single doubt about this. #YouKnowMe

When I was younger I had an abortion. It was the smartest decision I could’ve made, not only for myself & my boyfriend at the time, but also for this unborn fetus. For a baby to’ve been born to two people — too young and completely ill equipped — with no means or help from family, would have resulted in a child born into an unnecessary world of struggle. Having a baby at that time would have only perpetuated the cycle of poverty, chaos and dysfunction I was born into. Forcing a child to be born to a mother who isn’t ready, isn’t financially stable, was raped, a victim of incest (!!), isn’t doing that theoretical child any favors. For those of you insisting abortion is murder, and to Rep. Terri Collins who said “an unborn baby is a person who deserves love and attention” — forget bringing up the mother might be in need of some “love and attention.” What do you think happens to these kids who end up bouncing around in foster care, live on government assistance because the mother has no help, can’t afford childcare while she works a minimum wage job, and is trapped in a cycle of trying to survive on the meager government assistance so many of you same pro-lifers are determined to also take away. If you insist on forcing women to carry to term, why do you refuse to talk about comprehensive sex-ed, the maternal mortality rate, free daycare, paid maternity leave? Our lives, traumas & family planning is for no one to decide but us. Certainly not a group of old white men. Speaking of men… With all this punishment for women I wonder where all the punishment is for the men in this scenario. By looking at the photo of all the men who are making this mess, I find it hard to believe that if it were the autonomy of a man's body, health and life in question, I cant help but be certain we wouldn’t be having this conversation in the first place. I appreciate seeing men speak up on this issue – women do not get pregnant alone. Lest we forget, outlawing abortion has never stopped women from attempting it. @abortionfunds @yellowfund & @EmergeAmerica @emilys_list @runforsomethingnow who work 2 elect pro-choice candidates. #YouKnowMe

The decision was made by a male-dominated State Legislature

The New York Times report that one of the many reasons people are upset about the new law is because the State Legislature who made the decision is overwhelmingly dominated by men. Of the 140 seats in the Alabama Legislature, only 22 are held by women. On social media, women were outraged that a decision about their bodies was made by a State Legislature that consists of mostly men. On the other hand, opinion polling in the past has shown that the majority of Alabama is against abortion.

Back in 2014, 58 percent of Alabamians voted for abortion to be illegal in all or most cases, and of the 58 percent, 51 percent were women, according to the Pew Research Center. State records also show that the number of abortions performed each year in Alabama has declined with a significant amount from 2007 to 2017. In 2007, 11,276 abortions were performed. By 2017, the number had decreased to 6,678.

Despite the fact that a lot of people in Alabama are in favor of the new law, there are many others who are not happy with the new development at all. Statements from those who are in favor of it mostly cited religion as the main factor for their opposition to abortion. Caroline Reddy, 32, who is the mother of two children, said that she believes humanity shouldn’t get to decide who gets to live and who gets to die.

“I’m Christian and I don’t believe we need to be playing God, deciding who gets born and who gets aborted. I believe it’s murder. If people would have behaved in a proper way they wouldn’t be in that situation.”

Another woman who shared this view, Mallory Parker, 17, said that she believes every child that is conceived serves a purpose.

“I believe if a woman carries a child, despite the situation, it is part of God’s plan. No one is asking her to raise it, but I do believe if that child was created, it has a purpose, and it’s our duty to humanity to allow it life, instead of dictating if it should live or not just because of how it got here.”

Then there were those with opposing views. Many women said that the new law makes them very uneasy. Erin Arnold, a biology teacher from Birmingham, said that women should have full jurisdiction over their bodies.

“It’s insulting as an educated woman – in consultation with my highly educated doctor – that I can’t come to a decision that’s best for me and for my health. A woman should have agency over her body. I sometimes wonder if Alabama is the state to raise my children. I waver. When laws like this pass, it’s frustrating.”

There are people ready to oppose the new law

Whether the Supreme Court will revisit its decision of 1973 remains to be seen. American Civil Liberties Union of Alabama Executive Director Randall Marshall said that he is ready to take Ivey to court and will not allow the new law to pass.

“By signing this bill, the governor and her colleagues in the state legislature have decided to waste millions in Alabama taxpayer dollars in order to defend a bill that is simply a political effort to overturn 46 years of precedent that has followed the Supreme Court’s Roe v. Wade decision. We will not allow that to happen, and we will see them in court. Despite the governor signing this bill, clinics will remain open, and abortion is still a safe, legal medical procedure at all clinics in Alabama.”

This is clearly not going to be an easy case – and with so many different opinions out there, it can be hard to pick a side. One thing that cannot be overlooked is the fact that this new law will prevent rape and incest victims from ending an unwanted pregnancy. Not having that freedom could have horrible repercussions for those people. A lot of things would have to fall in place for this law to become permanent, so in the meantime, all we can do is wait and hope for the best.

Over to you: what do you think of this new law? Should abortion be illegal no matter what or should there be exceptions? Sound off in the comments.