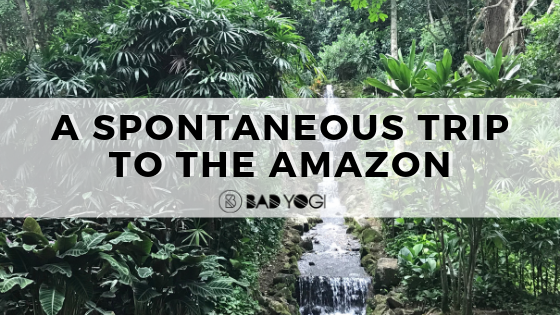 A Spontaneous Trip To The Amazon

My mom would call it the trip from hell while I like to think of it more as an adventure I will one day tell my grandchildren about.

My parents are retirees (or crazies as I thought of them when they moved me from the U.S. at the tender age of 17) and had decided to move to Ecuador; more specifically the town of Cuenca. In the last few years, Cuenca has become quite a popular destination for the retired population of the United States with the visa given out by the country, and the inexpensive lifestyle.

After moving there, my dad became obsessed with the idea of gold dredging. Something made quite popular by shows like “Bering Sea Gold” and “Gold Rush.” Men love these kinds of shows; big, masculine, bearded guys getting rich by finding gold in the dirt and using giant machines to do it. My husband seems to have a massive crush on Todd Hoffman; apparently he’s the ultimate hero of the Discovery Channel.

My dad began pouring over dozens of books about how to build a dredge, stories of El Dorado, and the Amazon river. All I could find when I googled it were tribes that ruled the land with their own laws, and had a fascination with shrinking heads.

One night, seemingly on a whim, my dad decided he wanted to go to the Amazon the next day because he needed to see where he could look for gold in the future. I immediately went to the store to buy Oreos, peanuts, and raisins, knowing how much I hated Ecuadorian food and that it was possible I wouldn’t find a market with anything I liked. I prepared an outfit of a cotton long sleeved shirt from Ralph Lauren, a pair of denim shorts, and black converse; I assumed this would be the uniform for trekking through the Amazon (as only a pure novice would.)

The next day we set out for the Cuenca bus station. We walked around this very busy place, talking to people in broken Spanish, and trying to figure out which desk out of a hundred we should get tickets at. Finally, we talked to a security guard who directed us. After getting our tickets we were on our way. What we were on our way to was anyone’s guess, but that is half the excitement.

A bus trip in Ecuador always comes with some danger, depending on your destination. Roads run along the edge of mountains with no guard rails, and the buses frequently try to pass each other while going around sharp turns. You can stick your head out the window and smell burning brakes, and hear the hiss as the drivers slam to a halt.

After a few hours driving upwards through the mountains we hit a dirt road, and kept going. Eventually we found ourselves behind a line of buses and cars all stopped on the one lane road with a steep drop to the side. A bus had broken down and was being fixed by three men covered in black grease under it. I jumped off the bus to inspect the surroundings.

A bridge was behind us, and to the side of it was a huge waterfall going straight down the mountain. As beautiful as this was it also made me realize I really had to pee. I looked over to the bus and saw a dozen Ecuadorian women in their traditional clothing taking a squat next to it, using their long dresses as a cover. In jeans, I was apparently not as adept at the art of peeing outside, so I refrained.

An hour later we were back on the bus. There were points in the road where we went through natural tunnels, and literally over waterfalls; the water sprayed the bus window like we were on Maid of the Mist at Niagra Falls. At another point in the road we encountered a mudslide, but we were told not to worry. A tractor came and dug up enough dirt for the bus to go right over it.

We pulled into the town of Santiago de Mendez and it looked like most Ecuadorian towns. A colorful park stood in the center with a yellow church in front of that. We checked into our hostel and crashed for the night, but not before eating a huge plate of french fries at the restaurant next door (the only thing my picky appetite considered edible.)

In the morning we boarded a bus with a cardboard sign on the front that read “Yuquianza.” If you google this, you will be rewarded with a red dot on Google Maps surrounded by nothing but green forest with a long brown river going through the middle.

Once more, we were on a very interesting, if not pretty dangerous, bus ride. After driving along a dirt road through nothing but trees for 2 hours we arrived at our destination. A wood hut, about the size of a basic studio apartment, that contained 2 long tables with benches and a woman serving food off a grill. Baby chicks played around on the floor, and a couple old men sat talking in the corner. So, this was Yuquianza.

We spotted the river way down below, and my dad told us he needed to go there to search for his dredging spot. Something I never considered about the Amazon is how often it rains. A huge tsunami of a thunderstorm comes in every hour and then the sun comes out again, which causes the ground to become very muddy.

We began walking down the edge of this huge mountain through knee deep mud and tall grass. Eventually we reached the river with a small sandy beach next to it. My dad decided to walk around and inspect the area while my mom and I decided to take off our shoes to wash our feet in the river. When I came back up on the sand I felt hideous burning and stinging being inflicted upon me by something I had never seen before; sand fleas. I got so many bites that I looked like I had chicken pox for a week after and had to slather my legs in calamine lotion every night.

My dad waved us over to a cave with a round area of sand in front of it. He got excited and giggled, realizing he had stepped into quick sand. I sarcastically let him know I would take a picture for the family Christmas card next year.

After my dad had done enough researching of the area we walked back up the muddy mountain and took a seat on one of the benches in Yuquianza. The lady behind the grill told me the next bus would not be coming until later in the evening, but she had no idea when. My mom had some sort of caffeine related panic attack, realizing there wasn’t any coffee around and I sat down quite upset, realizing I might actually have to eat the food there.

When the sun came out, after the sixth thunderstorm of the day, I decided I would try to be optimistic. Throwing my backpack on my shoulders I left my parents at the wood hut and trekked down the road to a bridge where I saw the most beautiful view of nature. The sun was shining on the wet trees, and everything was an intense green that I didn’t even know existed. I suddenly felt like I was as close to nature as I could possibly get in this world.

I walked back to my parents and tried my best to eat some white rice with chicken; this was not easy since there were no sinks or cleaning facilities, and my mind kept going back to the person cooking the food.

Hours later, when the sun had set and the bugs came out (bugs is not really a good word for the insects that I saw there) I was laying down on a long bench, hungry and delirious with exhaustion. I spotted a pair of headlights in the distance and realized it was the bus coming. I jumped up, and my mom and I hugged and cheered like two women who were not cut out for the harsh nature of the Amazon.

When we got on the bus it was completely full so we had to stand in the aisle pushed up against the sweaty bodies of strangers in the dark. It wasn’t all bad though; when I looked up out of the window, I saw more stars than I’ve ever seen in my life. Millions of stars that went on for miles, big and small. I realized that sometimes it’s worth sacrificing your comfort for a glimpse of the true beauty of nature.