A Must-See Phenomenon: The “Firefall” is Glowing in All Its Fiery Glory

Lovers of nature’s phenomenons take note – the “Firefall” at Yosemite National Park in California is glowing bright orange in all its glory, but only for a short period of time.

What is that orange glow?

CNN explains that the “Firefall”, also known as the “Horsetail Fall”, is a natural phenomenon that appears at this time of year when the setting sun’s light falls onto the waterfall in Yosemite Park at just the correct angle. This causes the fall to glow a bright orange, making it appear as if lava is flowing over the cliffs instead of water. 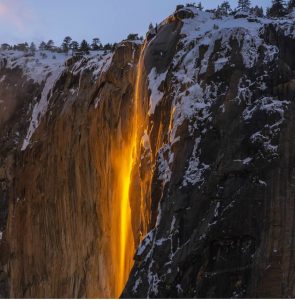 The “Firefall” is only visible for a short period of time every year.
Image: CNN

The “Firefall” is visible for a short period of time in February every year, drawing hundreds of people who want to witness the fiery magic for themselves. It also never looks the same. As with everything else in nature, there are variables that cause the fall to look different every year. In this case, the amount of water that is flowing from the rocks will impact what it will look like. One thing that never changes year after year is its beauty.

Photographers are flocking to the fall for the perfect shot

Needless to say, the “Firefall” is any photographer’s dream and Vaché Geyoghlian was one of the lucky ones who got to take some Insta worthy pictures of the fall. He told CNN that he was extremely excited to finally be able to see it in person and get some amazing shots in the process. Many others who captured the mystical glow have shared their pictures on Instagram.

Witnessing the very rare “Fire Fall” last night was something I’ll never forget 🔥 We set off on a 27hr strike mission with no sleep to capture Yosemite covered in thick blankets of snow all day and to hopefully capture the firefall at sunset. We lucked out and scored an absolute burner! For those who don’t know: Only a couple days of the year in February, the sun sets at the perfect angle casting rays onto Yosemite’s horsetail fall. This waterfall doesn’t flow all year round and some years not even at all. But when you get lucky enough with waterflow and a perfectly clear sky, this magical phenomena occurs for just brief moments! ✨

The glow is fading soon

For anyone wanting to capture this rare moment of beauty, you have until this weekend before it completely disappears. If you want to see it in person and get a few shots of it, make sure you make your way over to the park early enough before it gets too crowded. 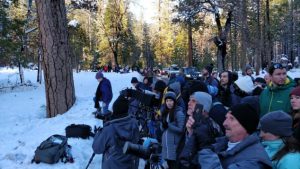 You can expect to find a huge crowd trying to capture the magic of the fall.
Image: magicphoto78/Instagram

Scott Gediman, the spokesperson for National Park Service, warned potential visitors that the weather is playing a major factor in viewing the “Firefall” this year because of the recent snow and storm activity. You’re either going to show up and see the fall in all its glory or you might miss it due to bad weather. Luckily, the park has a hotline you can call to get information about the road and weather conditions. Just give them a call at 209-372-0200.

Nature surely never ceases to amaze or impress. Are you living near the fall? Have you seen it? Tell us your stories and share your pictures!