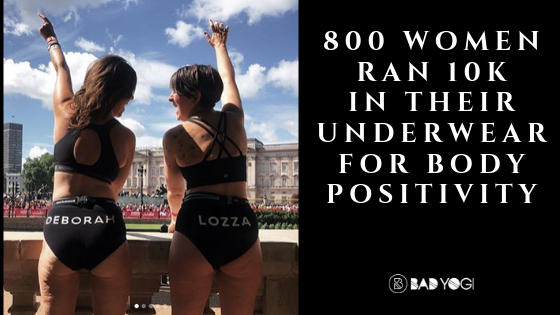 800 Women Ran 10k In Their Underwear for Body Positivity

This month, we’re focusing on all things body image related, because there’s nothing more important than learning how to love your body. It might be the hardest thing you ever have to learn how to do, but once you get to a point where you love the skin you’re in, you’ve accomplished a massive goal. Reaching for your goals is much easier when you have some kickass women by your side, as was proven last week when a group of 800 women went for a run through the streets of London in their underwear. 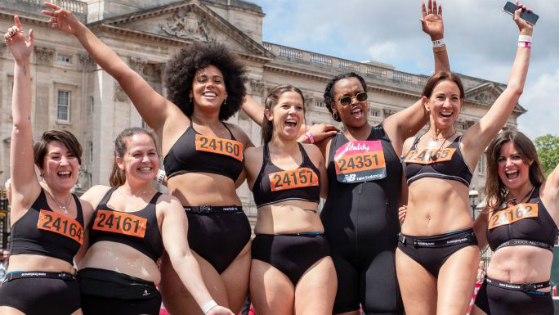 Women running in their underwear

Yes, the power of women is real, and it was there for everyone to see when podcaster and journalist Bryony Gordon gathered with her celebrity friends and hundreds of other women to undertake their very unique run. Most women aren’t even comfortable with their best friends seeing them in their underwear, so going for a run in nothing but your underwear must be nothing short of terrifying – but these 800 women did it anyway.

You already have a “runner’s body”

According to Runner’s World, the ladies’ run was part of the “Celebrate You” campaign at the Vitality London 10k. Gordon and her friends seized the opportunity to show everyone that there’s no such thing as a “runner’s body”, reminding women everywhere that running is not about having a perfect body and looking like a perfect athlete. All you need for running is a body, and boom, there you have a runner’s body. Pretty simple, right?

Gordon was joined by the likes of Loose Women presenter Andrea McLean, as well as famous podcasters and campaigners Deborah James and Laura Mahon. The comedy duo Ellie Gibson and Helen Thorne, known as Scummy Muummies, was also there, along with mom and author Giovanna Fletcher.

Last year, Gordon kind of kicked off the campaign with plus-size model Jada Smith as her only companion, running the 2018 Virgin Money London Marathon in their underwear. The response they received was overwhelmingly positive, and they took it as a sign that they needed to do it again to inspire more women to get into running and feel comfortable in their bodies while doing it.

All the women who participated in this year’s run couldn’t emphasize enough how much they loved it – they all have different reasons, but one synonymous reason is that it was a liberating experience.

Those who ran in the “Celebrate You” group took to social media after the run to share their experiences. One woman said that she had been so nervous to run in her underwear, but by the end of the race it had felt like the most natural thing in the world.

Another praised the campaign for making women feel “unapologetically seen”.

Another woman said that it felt like she was doing something for the sisterhood and that it was a very rewarding experience.

“What an amazing achievement this was for us all. Totally humbling, inspiring and incredibly liberating to share in such an occasion. 🙌🏻 I ran the London marathon from you inspiring [me] to live my best life and today [was] equally as rewarding… felt like we were doing something for the sisterhood! Thank you for putting yourselves out there and bringing us all along for the ride. Together we are stronger!

Another runner said that the run has changed the way she sees herself, and that she no longer feels self-conscious about how her body looks. It’s a runner’s body just the way it is.

Women need to see what “normal” bodies look like

It’s amazing to see how this campaign changed the way women look at their bodies. Reading how some of them thought they were the only ones with dimples and cellulite on their thighs is actually shocking – the media has clearly succeeded in fooling us on how “normal” bodies look. Let’s be honest – when you’re a woman, you have cellulite somewhere. It’s part of having a body. Isn’t it about time we make peace with it and show it to the world? It’s clear that women need to see how other “normal” women look, because knowing that other women look just like you and have the same “imperfections” as you can go a very long way.

Gordon also took to Instagram after the run to extend her thanks to everyone who took part in the campaign.

Show off your body just the way it is

This is an amazing initiative and seeing the impact it has made on the women who took part in it is absolutely amazing. Why shouldn’t women show off their bodies just the way they are? Why are you only “allowed” to show off your body when it meets society’s ridiculous standards? That’s nonsense. Hopefully, this campaign will extend even further than just the run and will go on to empower women all over the world. Your body is amazing just the way it is. It can do amazing things. Celebrate it. Love it. Be kind to it.