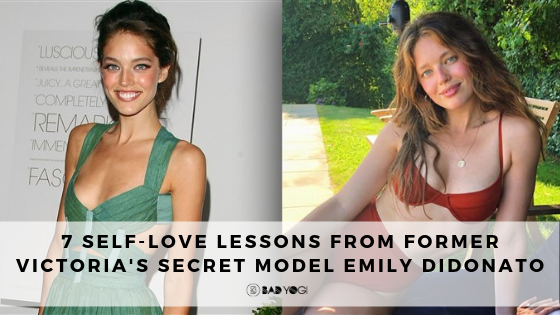 Emily DiDonato, 28, used to be a Victoria’s Secret model. She was scouted at a mall when she was still in high school. Once she graduated, she excitedly went off to New York City to live her dream. She threw herself into castings, hopeful to become a successful model, only to be met with the usual “you’re too big” or “too curvy” or “too athletic”.

The younger version of DiDonato wanted to make her career work no matter the cost. So, after she was told that she wasn’t skinny enough for the job, she dropped some serious pounds, going from 140lbs to a mere 118lbs in a matter of weeks. She became super aware of what she was eating and hit the gym every chance she could get. Luckily, before it all got the better of her, she decided that enough was enough and that she could no longer deal with all the negative self-talk she was putting herself through.

After reaching this point, DiDonato went on a journey to rediscover herself, and she did a pretty epic job. So, take out some pen and paper and take notes, because this woman knows what she’s talking about.

DiDonato is very open about the journey she had to go through in order to get to where she is today and isn’t scared to admit that it was a hard one, and continues to be tough. She knows that a lot of people saw her as “perfect” back in her days of being a Victoria’s Secret Model, but she admits that she was feeling anything but perfect. 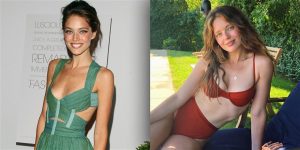 DiDonato admits that she’s much happier at a size 10 than she was at size 00
Image: emilydidonato/Instagram, Getty Images

In a recent video she released on YouTube, she documented her journey and was very open about everything she was dealing with during that time. “People have seen me on billboards or catalogs or ads and might think that I have a perfect body and love myself and have a perfect life, but that’s not the case. I’ve struggled with self-love and my body, and sometimes the reality behind those shoots is often a very insecure person, or at least an insecure day that I’m not feeling my best.”

2) Accept that it will be a challenging journey

DiDonato also admitted that she used to take very extreme measures to maintain a certain look. She told Today that there was never really a big moment that changed everything for her – it was the journey she had been on and finally coming to a place where she was more at peace with her body. She admits that this is no easy task, saying, “You don’t wake up and say ‘I love myself, I love my body.’ It’s a challenge. It takes work.” 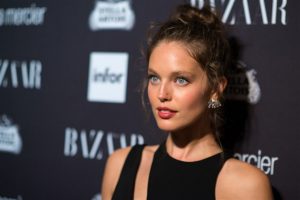 DiDonato has received an outpour of support after releasing a video on YouTube that documents her journey.
Image: Michael Stewart / WireImage

3) Listen to your good friends

Something else that was probably DiDonato’s saving grace was friends who looked out for her. After her dramatic weight loss back when she was trying to impress agencies, fellow model Julia Stegner and makeup artist Charlotte Willer both checked in with her to make sure if she was doing okay. Both were concerned about her well-being and this opened DiDonato’s eyes and she regained all of the weight she had lost – and then some. She admits that she’s much happier at a size 10 now than she was at a size 00, and you can tell in the pictures.

Something that helped DiDonato to stop the negative self-talk and create a more positive relationship with her body was saying out loud the things she used to say to herself in her head. This opened her eyes to how toxic she was being to herself. “Even saying it out loud I was like, ‘Ouch, that hurt’ … When I hear how I spoke to myself out loud I was kind of like, ‘Oh my goodness, I would never say that to anyone,” she says. 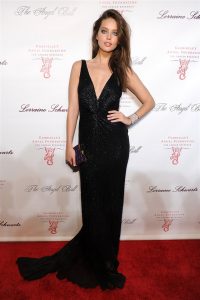 Stopping negative self-talk is one of the things that helped DiDonato on her journey to self-acceptance.
Image: Dimitrios Kambouris

To prove to herself that she could have a more positive relationship with her body, DiDonato told her agency that she wanted to pose for the Sports Illustrated Swimsuit issue. She landed the gig in 2013 and for the first time appeared with all her glorious curves intact. She did not jump into it without some insecurities though. DiDonato admits that, when the photos were released, she looked at her body and had to work hard not to undo all the work she’d done so far to be positive about it. “I hated the way that I looked. I thought I looked so big and so fat and curvy and just, like, a lot.” Fears started to creep up on her that the cover would ruin her career. As it happened, the curvier images of her had the opposite effect. 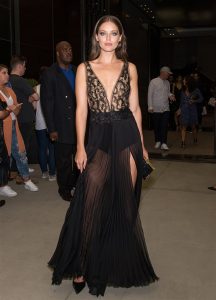 DiDonato admits that the journey to self-love is not an easy one, but is totally worth it.
Image: GC Images

6) Stop comparing yourself to others

After the images were released, DiDonato’s career literally blossomed. She had more work than ever before and she recalls feeling very free emotionally during that time, admitting that having been bombarded with what an ideal body is supposed to look like had had a very negative effect on her self-esteem.

“I think we’ve been bombarded with this certain body ideal by (advertising) and now we have Instagram. So I think another important thing to remember is that a lot of the images that we see … they’re Photoshopped, it’s Facetune. Even though they’re not necessarily real, we still compare ourselves to them. I think comparison is the actual devil.”

Now and then .. I posted a video on my YouTube channel talking about my road to self love and body confidence. It took me a long time to feel comfortable in my body. I’ve fluctuated over the years from a double zero to a size 10 and I remember being so embarrassed and ashamed of that. I wish I was kinder to myself because I am only human but I thought models were meant to be a 00 and stay a 00. I was always hesitant to talk about body positivity or body diversity because I am aware being a size 6 or 8 is nothing ground breaking but in the modeling industry, my size hasn’t always been represented, celebrated or accepted. For me, feeling comfortable in my skin has taken a lot of work and effort and I wanted to share that with you guys. ❤️ Link in BIO!

We couldn’t agree more with that last part. DiDonato says that these days, she just tries to “judo chop” any negative thoughts as soon as they form in her mind. She’s well aware of the fact that being at peace with yourself and your body isn’t a destination, but a journey, admitting that some days are harder than others, as it is for us all.

“This journey for me is still a work in progress. I still wake up some days, even since I posted that video, and I’m like, ‘I don’t feel great today’ or ‘I don’t feel great in my bikini on vacation 24/7. It’s a journey and I just feel like it’s looking at it like there’s no finish line. It’s just a conversion that’s constantly going to evolve.”

7) Find ways to inspire others

Regarding the video that she put up on YouTube, DiDonato says that she’s happy that it’s resonating with people. The video received an amazing amount of support – on YouTube as well as Instagram. DiDonato says that the response has truly been overwhelming, adding, “In my direct messages, there are just so many girls who have reached out to me with their stories and journeys.”

Eating, drinking and biking my way through Italy 🚲 🍷 🍝

It’s so great when someone like DiDonato tells it like it is. Having been a Victoria’s Secret Model, she knows what it’s like to mimic perfection – and she’s proof that no one can keep that facade up for too long without it completely destroying them. If she can learn to love her body after everything, so can you. Yes, self-acceptance and self-love aren’t easy, it’s not instant, and it’s something you have to work on every single day – but that’s all part of the journey. Take it in your stride with all its twists and turns and appreciate the beauty of evolution.

Over to you: What has been the biggest challenge on your journey to self-love and acceptance? Share your stories in the comments.