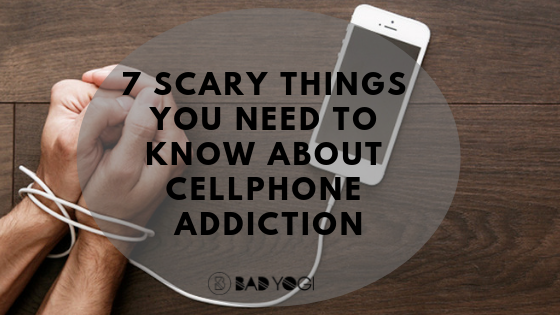 7 Scary Things You Need to Know About Cellphone Addiction

Cellphone addiction is real. Are you constantly grabbing your phone to check your messages or spending hours mindlessly scrolling through social media? These are some of the symptoms associated with cellphone addiction. Our cellphones are our constant companions, and if you’ve ever experienced anxiety when your phone’s battery was running low without a charger in sight, you’re not alone.

According to comScore, we’re spending way more time on our phones than we actually realize. A 2017 study has found that the average American adult spends about 2 hours and 51 minutes on their smartphones on a daily basis. That might not seem like much, but once you start to add up those numbers, it gets scary. MediaKix did the math and found that over a lifetime, those numbers add up to a total of 5 years and 4 months. Yikes! Clearly, we’re spending way too much time on our phones, and breaking this pesky habit might be even harder than trying to quit smoking. But fear not – there are always ways to kick your bad habits, and we’ll start by introducing you to the scary things you need to know about cellphone addiction.

Yeah, there’s a pretty nifty quiz you can take, called the Smartphone Compulsion Test. This quiz was developed by David Greenfield, Ph.D., of the Center for Internet and Technology Addiction at the University of Connecticut School of Medicine. Spoiler alert: if you answer “yes” to 5 or more of the 15 questions, it means you’re pretty much hooked and need help. But don’t panic – according to journalist Catherine Price, who wrote How To Break Up With Your Phone, you basically have to not own a smartphone to even have a chance of passing that test.

Ever heard of “phubbing?” Yeah, that’s an actual word. According to Health, it refers to the awful habit of texting while a friend is talking to you, derived from the term phone-snubbing. We think that pretty much everyone would agree that there’s nothing worse than pouring out your heart to someone in a conversation while they’re casually typing on their phone, pretending to be listening to you. Rude! It’s terrible that this has become such a common thing that we now have an official name for it. Gee, face to face time is important. That little screen can wait until later. 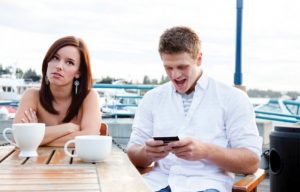 3) Your cellphone is actually changing your brain

Would you allow any person or device to make changes to your brain that might be potentially harmful to your memory? No? Well, guess what, your cellphone is doing exactly that. If you’ve noticed that your ability to concentrate and remember things you’ve read has declined since you started doing all of your reading online, you’re not imagining it.

In her book, Price explains why this happens – digital media is cluttered with links and ads and short bursts of your attention are required while swiping through social media or replying to comments and tweets. These short bursts of attention cause your brain to enter “an intensely focused state of distraction.” Yes, it might sound contradictory, but that’s exactly what happens. You might dismiss it and think that distraction is, after all, a temporary thing, but according to Price, the effects of this state is actually long term. Long term in a way that’s actually quite frightening. “This type of frequent, focused distraction isn’t just capable of creating long-lasting changes in our brains; it is particularly good at doing so,” Price says.

So yes, your cellphone can indeed alter the way your brain functions, and none of us want to end up not being able to remember anything we’ve read after we’ve read it. What a waste of time that would be. But we tend to forget that the very thing that triggers this state, namely social media, actually wastes a lot of our time as well. So, is it really worth it?

4) Your favorite apps were designed to hook you

We all do it – reaching mindlessly for our phones to check anything that might’ve popped up in our notifications, and if nothing did, we go onto social media anyway to check what we’ve missed. Yes, we are the generation infected with FOMO (fear of missing out), but it’s not entirely our fault. Social media outlets design their apps in a way that is meant to cause addiction. In fact, they’re very sneaky and incredibly brilliant at it. Price explains: “Instagram has created code that deliberately holds back on showing users new ‘likes’ so that it can deliver a bunch of them in a sudden rush at the most effective moment possible—meaning the moment at which seeing new likes will discourage you from closing the app.” Like, what? They’re literally messing with our minds, and we’re falling for it hook, line, and sinker. 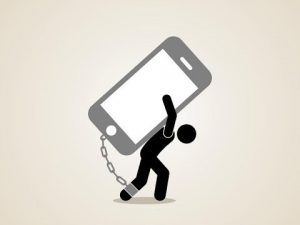 You see, social media apps aren’t actually free when you think about it. Yes, you don’t pay a dime to use them, but according to Price, you’re not even the customer and social media apps are not the product. You, the customer, is the advertiser, and the product that is being sold is your attention. Whoah, hold up, so our attention is being sold? Without our permission? Well, not really. We do it willingly, frequently, and quite happily. These apps are making millions out of our attention and they’re not even paying for it. Think of every ad on Facebook or Instagram. They’re there because the app has your attention. People market their products and brands on these platforms because you’re looking at them and using them every single day. When you start to look at it this way, you suddenly have a lot more motivation to use them less, don’t you?

According to Price, our attention is one of the most valuable things we have. “When we decide what to pay attention to in the moment, we are making a broader decision about how we want to spend our lives,” Price says. We can surely think of better things to give our attention to than other people’s selfies. Imagine the things you might discover when you’re no longer glued to your phone.

Yeah, no kidding. You know that anticipation you feel when picking up your phone to check your messages and notifications? Especially when you’re waiting for something important or exciting from someone? Well, psychologists have a name for that – it’s called intermittent rewards. Another device that encourages addictive behavior by preying on people’s anticipation is slot machines. Yes, your smartphone is a small slot machine that fits into your pocket. It doesn’t sound too good, does it?

Did you think the fact that Steve Jobs didn’t allow his kids to use an iPad was because he’s simply a good parent? Or the fact that Bill and Melinda Gates didn’t allow their children to have phones until the age of 14 was because they’re simply concerned parents who believe kids need to live a tech-free life for some time? Well, yes and no. For one, they are well aware of the effects these nifty little devices can have on adults, not to mention kids. 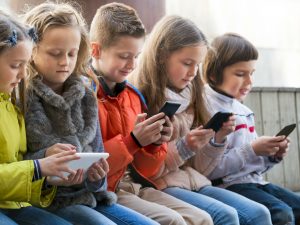 Parents everywhere can testify to the fact that you don’t really want your kids to be sucked into the digital world while you yourself are still struggling to get control over your own digital behavior. If the people who invented these devices are taking measures to make sure their kids don’t get sucked into all of it too early, we can all assume that cellphone addiction is very real, and a very nasty habit at that.

How the heck do I get rid of this addiction?

There are many books out there to help, including Price’s. But if you don’t have the resources to buy a self-help book right away, there are some small, but effective steps you can take to reduce your cellphone use and turn that addiction around.

The first thing you’d want to do is to disable your phone’s notifications – every single one of them. Then you can download a tracking app like Moments to help you get an idea about how much time you’re really spending on your phone. The numbers are bound to shock you and hopefully, they’ll awaken your competitive side and you’ll try to reduce them every day.

Keep the phone out of the bedroom

Another good tip is to keep your phone out of your bedroom – then there’s no temptation to reach for it before you go to sleep or grab it first thing in the morning when you wake up.

Yeah, we hear you – what about your morning alarm? Well, we’d say that this is the perfect time to go shopping for a beautiful, old-fashioned alarm clock. Perhaps buy it as a reward to yourself after cutting down on those hours you spend on your cellphone.

You can do it!

The truth is that we’re all addicted to our phones in one way or another, but we can beat those bad habits if we really want to. You might be surprised at how much more free time you have on your hands when you’re not constantly spending all of it on your phone. Go ahead, try it. You won’t be sorry that you did.