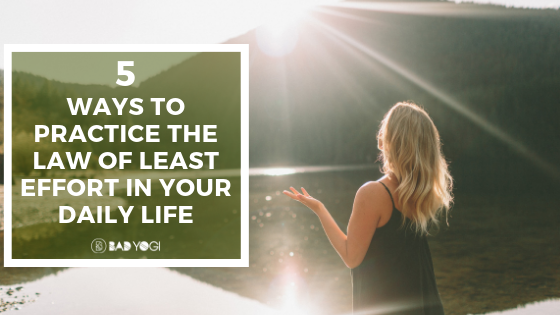 The Law Of Least Effort was made popular by Deepak Chopra in his 1994 self help book, “The Seven Spiritual Laws Of Success.” In a nutshell, it means we must accept the things we cannot change, stop fighting against what is happening, and stop worrying and feeling anxious about the future. Life can be mighty unpredictable at times, but forcefully trying to control the outcome of events is fighting against what is meant to be and what the universe has in store for you.

Originally called “The Principle Of Least Effort,” this theory was discovered by Guillaume Ferrero, a French philosopher, and published in an article he wrote for the “Revue Philosophique de la France et de L’Etranger” in January 1894.

The Path Of Least Resistance

The principle relates to what I’m sure most of you have heard of, the path of least resistance. It’s “the physical or metaphorical pathway that provides the least resistance to forward motion by a given object or entity, among a set of alternative paths. ”

I was struck by this lesson a few months ago when my husband and I went on a trip to the Harz Mountains in Germany, and I wrote this on my Instagram:

My husband and I climbed to the summit of Brocken mountain yesterday. The sky was a mesmerizing shade of blue, the air was fresh with pine trees, the climb treacherous and slippery with snow melt. Streams of ice cold water trickled down boulders between our feet as we wobbled and lunged and jumped avoiding puddles.

Water finds the path of least resistance. Over thousands of years it carves a path with patience and wisdom, finding the smoothest way down. It doesn’t struggle or push against rocks or go up and around the trees in its way but it gracefully goes around obstacles and leaves an outline in the earth for people to see where its been.

Growing up, I struggled with anxiety. I worried about things no child ever should, allowing this beast to infiltrate my mind at night, keeping me home from school for fear of being around other people. There was no refuge from the storm and as I got older it stuck around, hijacking my thoughts and mental health.

You would think some of the difficult or traumatic events I’ve experienced would leave me vulnerable, my thoughts open to this monster that kidnapped me and held me hostage for so long. But no.

I’ve realized in these last couple of months that I can’t control the outcome no matter how much I try to mold it to my liking. I can’t cling on to things in the past, fear the future or rewrite the uncontrollable. I’ve let go. I’m taking the path of least resistance.

The Law Of Least Effort requires at least 3 main commitments you must make should you want to practice it.

I personally consider this the most important step in practicing this principle, and it’s often the hardest. This doesn’t mean that you sit by and just allow life to pass you by without caring about goals, or aspirations.

Acceptance means that when bad events or situations happen to you, like losing your job or your partner breaking up with you, you don’t dwell on negative thoughts. You accept what happened, and you move forward from there.

The Law Of Least Effort doesn’t mean you have an excuse to not try or lack motivation to do anything. It means accepting the situation you’re in, and taking responsibility for your own life by taking real action to go in the direction you want to go in the future.

One of the biggest causes of anxiety is the desire to control everything, however you cannot control all the events in the world, or every bad situation you may find yourself in.
We must surrender to the process, and allow the universe to take us where we’re meant to go.

Taking The Path Of Least Resistance in Everyday Life

Surrendering control, and allowing life to unfold in the way it’s meant to is an everyday practice, and you won’t immediately become an expert at it (after all, we are all human.)

But there are some steps you can take each day to become better at practicing this law.

The grass does not force itself. The flowers bloom without resistance. The sun rises and sets every single day. The birds do not starve, they eat what they find. The trees grow big and tall, just as they are supposed to. None of these things have to think about what to do, they just are.
Observing nature can teach you a great deal about how to live you’r own life.

2. Trust in the universe

The easiest way to allow what is meant to be, is to have faith in the universe. This can be extremely difficult at times, especially when things are going wrong. It’s easy to have faith when everything is going right and things seem to be working for you.

However, remember, just because you’re not getting what you want, doesn’t mean you aren’t still on the right track, that is where faith really comes in.

3. Fight the urge to react

There are many different kinds of people in this world, and you won’t like a large number of them (people who take up the entire sidewalk without allowing you space, people who chew with their mouth open, people who use their cellphones in the movie theater, I could go on and on.)

However, reacting with negativity will only leave you feeling badly, not them. Imagine an invisible bubble around you, shielding you from the negative, and allowing only positive energy in.

While it’s important to make an effort at maintaining positive energy and trying not to allow a bad mood to take hold, sometimes it just can’t be helped.

We all have bad days, and we will continue to have them in the future. Trying to force yourself to feel happy will only call more attention to your bad mood. Sometimes it’s best to surrender to your bad day, do what you can to take care of yourself, and start again tomorrow. This too shall pass.

One of the biggest ways to cause yourself anxiety is to worry about a future that hasn’t happened yet. Remember, if what you were worried about actually happens then you’ve experienced the stress twice, and if it never happens then you’ve caused yourself stress over nothing.

Taking the path of least resistance, following the Law of Least Effort, is surrendering to where life will take you, where you’re meant to be.