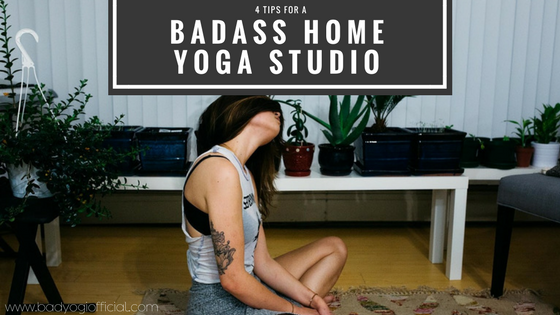 In the task of combining elements into an ideal yoga studio, whether it be for experienced or beginner yogis, there’s a lot more to keep in mind than just: a yoga mat, some blocks, maybe some straps.

With so many other factors to consider, it’s important to remember that yoga is much more than stretching and posing on the floor. Several other aspects come into play, many that even some veterans to the practice may not have realized.

Importance of a positive atmosphere

Not only does practicing yoga increase your physical strength and endurance, but it also works to relax your mind and soul. This we know. That’s why meditation exists. And yet, I’ve been to many a group studio where this aspect is forgotten, played off, or glazed over, despite it actually playing a crucial role in a person’s ability to fully embrace their potential.

In your own personal studio, the first step to focus on is making the space uniquely yours. After all, unless you’re planning on hosting group classes, you’ll likely be the one using it the most. Utilize candles, chimes, incense, even have prints made of some of your favorite photographs of puppies, or the ocean– what have you.Whatever you have to do to make the space comfy, inviting, and free of any outside distractions, don’t hesitate.

Invest in the right tools

Whether you prefer to enjoy your yoga-days in shorts and a t-shirt, or you’d rather spend the extra cash for some cute and comfy leggings, do whatever you have to to ensure your body is satisfied enough to let your mind wander someplace other than whether or not you’re uncomfortable in what’s on your body. The same goes for mats and blocks, take the extra time to figure out what you may like or not like between brands and styles, and do whatever you can to appease that desire.

If you’re too busy mentally complaining about the tools at your disposal because they aren’t exactly right for you, you’ll struggle with finding the inner peace that yoga supposed to be providing you. And when that happens, you’re only cheating yourself.

Some people may say that spending the extra money on cute new leggings is like throwing your money away (there are easier ways), but with everything in perspective, it’s more important for you to meet your own goals than to worry about what other people say!

Be in the mindset

I won’t deny that sometimes going into an exercise routine while in a grumpy mood might be exactly the needed medicine to lift your spirits, and yoga is no different– however, even with that in mind, ideally you’ll be approaching your studio for early-morning sun salutations with a cheerful gait, instead of dragging yourself there in exhaustion.

One aspect of overall wellness is, of course, eating well and taking care of your body outside of building muscle, strength, and flexibility. Focusing on nutrition and staying hydrated contribute just as much to a person’s general health than hitting the treadmill or the mat will.

If you struggle with changing your diet for the better, you don’t necessarily have to dive right into clean eating on the first day, either. Find small ways to incorporate healthy foods into your day to day, while simultaneously cutting out the bad– and eventually, you’ll be eating healthy without having to fight the cravings as you would if you tried to quit everything cold-turkey.

Another aspect to keep in mind, is keeping a positive mindset. Even if you’re day is turning for the worst, if you had a flat tire on the way to work, if you spilled coffee on your new blouse, find the better things to focus on and keep your emotions turned toward the positive. (With that in mind, though, certainly don’t condemn the days where all you need is a pillow and a good cry.)

While this ties into the first tip about creating atmosphere, I think it deserves a little blurb of it’s own, as well.

Every human being ever (that might be an overstatement), when faced with being seated in an office space, wants to sit next to the window. Why? Because apparently, it can “double your alertness,” along with making you happier. Not to mention, there’s just something about the warm, yellow glow of the sun that will forever outshine (heh) that of a desk lamp.

It makes sense, then, that in your under construction zen-haven, incorporating natural elements into the design will do far more good than harm. Whether it be a shelf of potted plants, succulents, or even just an open window that will allow in the crisp air of spring (or the chilled air of winter), having access to the outdoors in one way or another will certainly allow you to settle into your moments of relaxation. Even if they’re only reminders of the outdoors, like those photo-prints of the ocean I mentioned before.

When yoga is meant to be as equally spiritual as it is physical, it can be so frustrating and heartbreaking when people see it only with the eyes if “tone your arms!” or “increase your flexibility!”. But in a roundabout kind of way, the path of returning to it being a spiritual oasis, in itself, can be a mental journey of its own. When you bring the mentality back to yoga, you allow yourself to really experience a full-body workout, which normally only consists of muscle groups. Not only will you be strengthening your physical self, but your mental and spiritual self, as well.

Yogis, show us pictures of your home yoga studio (or your plans) in the comments!