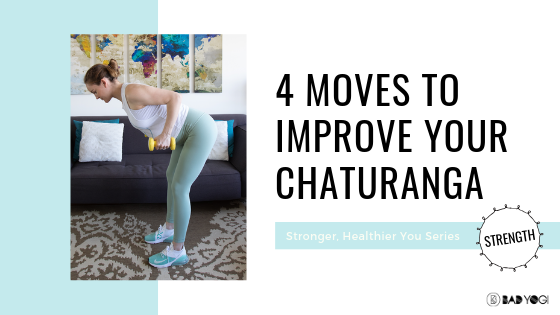 4 Moves to Improve Your Chaturanga

Chaturanga is one of those poses that confuses a lot of us!

It’s super common but that doesn’t mean it’s super easy. It’s actually one of the most challenging poses to execute because it requires so much strength of specific areas.

There’s a few moves you can do to strengthen the necessary muscle groups that will make your chaturanga smoother AND more effective.

Note: I suggested 3-4 sets, but if you’re brand new to these moves, start with one set of 10 reps and let that be enough. You’ll still improve your chaturanga when you practice over time.

1. Tricep Kickbacks, 3-4 sets of 10-12 reps.
If you don’t have weights, you can easily use two cans or two bottles of water! Bending from the hip crease with a slight bend in the knees, start by letting the arms hang down straight out of the shoulders. The palms face each other.

Then draw the elbows up and back towards the sky, being careful not to hike them up way past the ribs. Keep the elbows in close to the body. 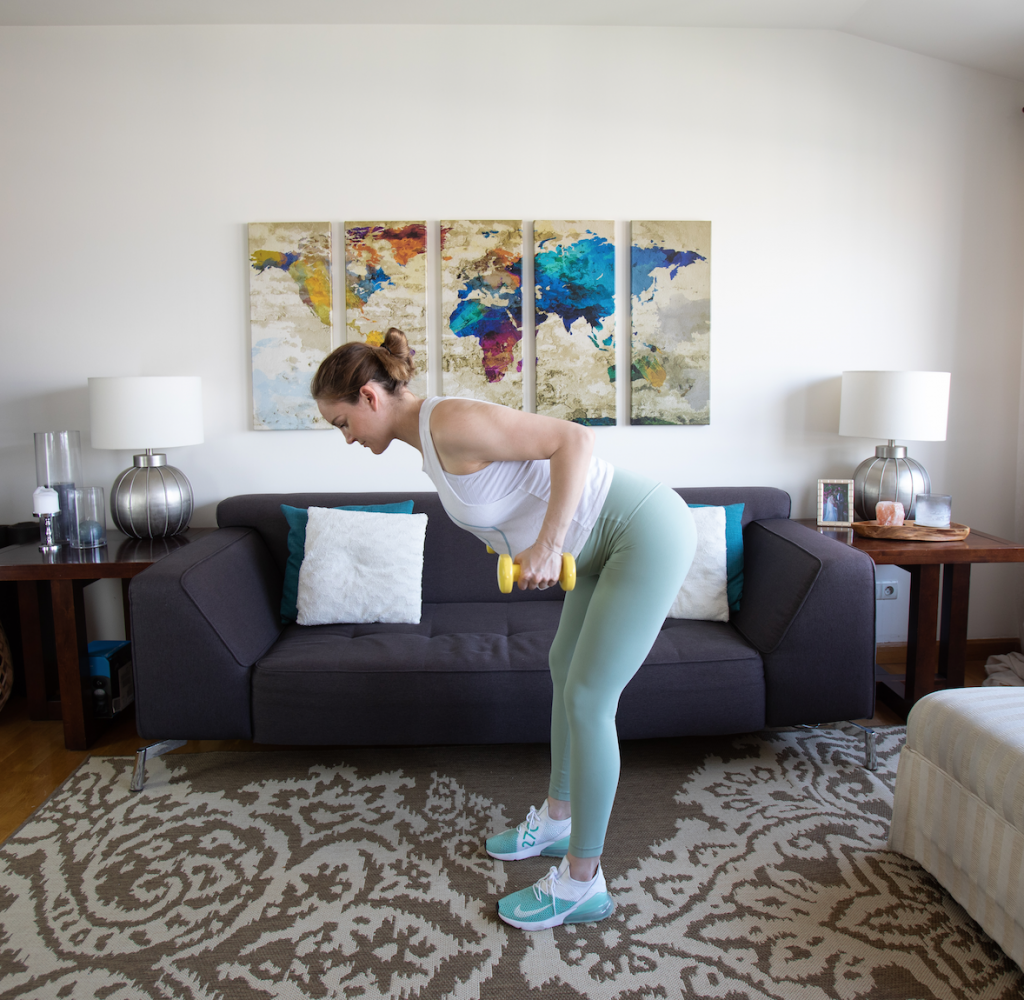 Lastly, “kick” the pinky fingers straight back so you feel a bit of good tension in the triceps. You may also feel this a little bit in the lats, but most of the effort should be isolated to the triceps. If you don’t feel it in the triceps, drop the weight and focus on really squeezing the triceps on the kickback. 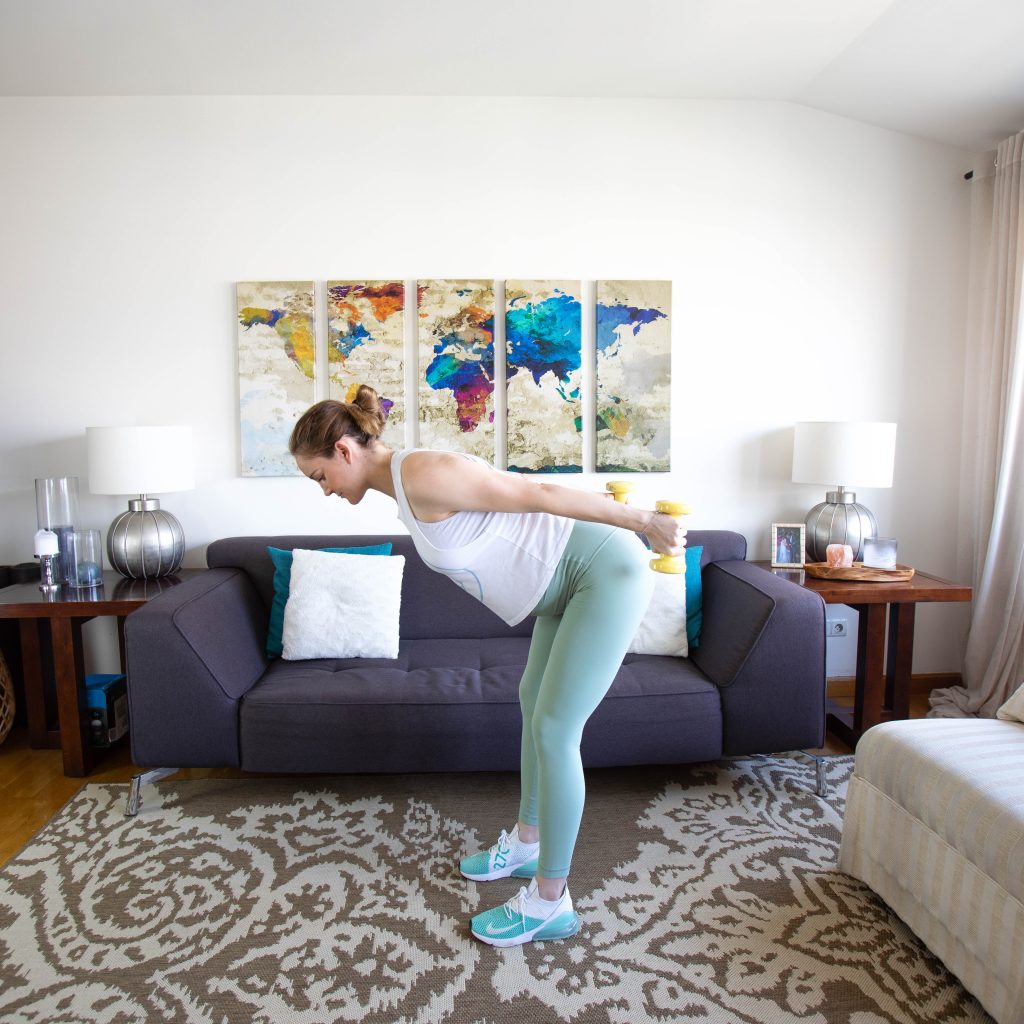 2. Bent Over Rows, 3-4 sets of 10-12 reps.
If you don’t have weights, you can easily use two cans or two bottles of water! Bending from the hip crease with a slight bend in the knees, start by letting the arms hang down straight out of the shoulders. The palms face the thighs. 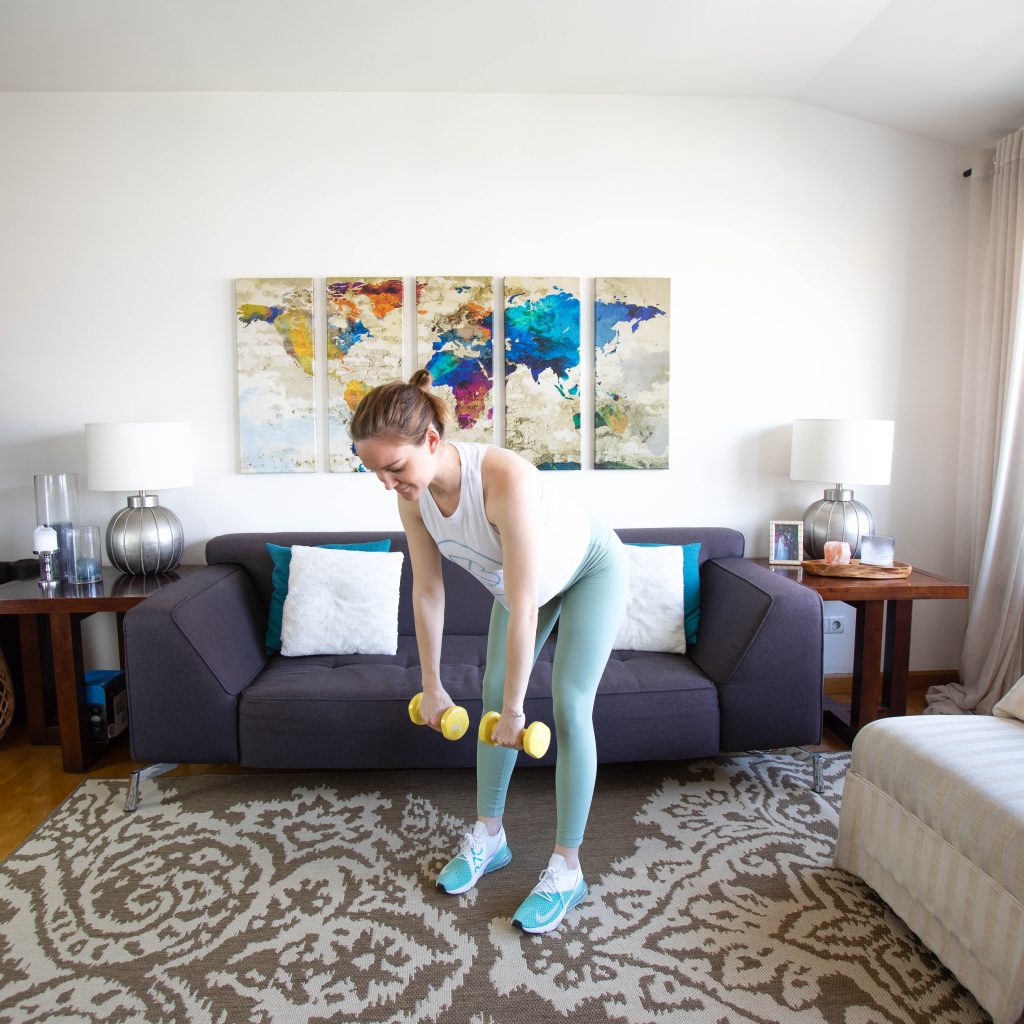 Keep the arms wide like you would in a traditional pushup and draw the elbows up and back. The dumbbells will lineup between the belly button and chest. You want to feel this mainly in the middle back (the erectors), but the lats, rear deltoids and biceps will feel something too because they’re supporting the movement. Do NOT round your back. If it rounds, drop the weight. 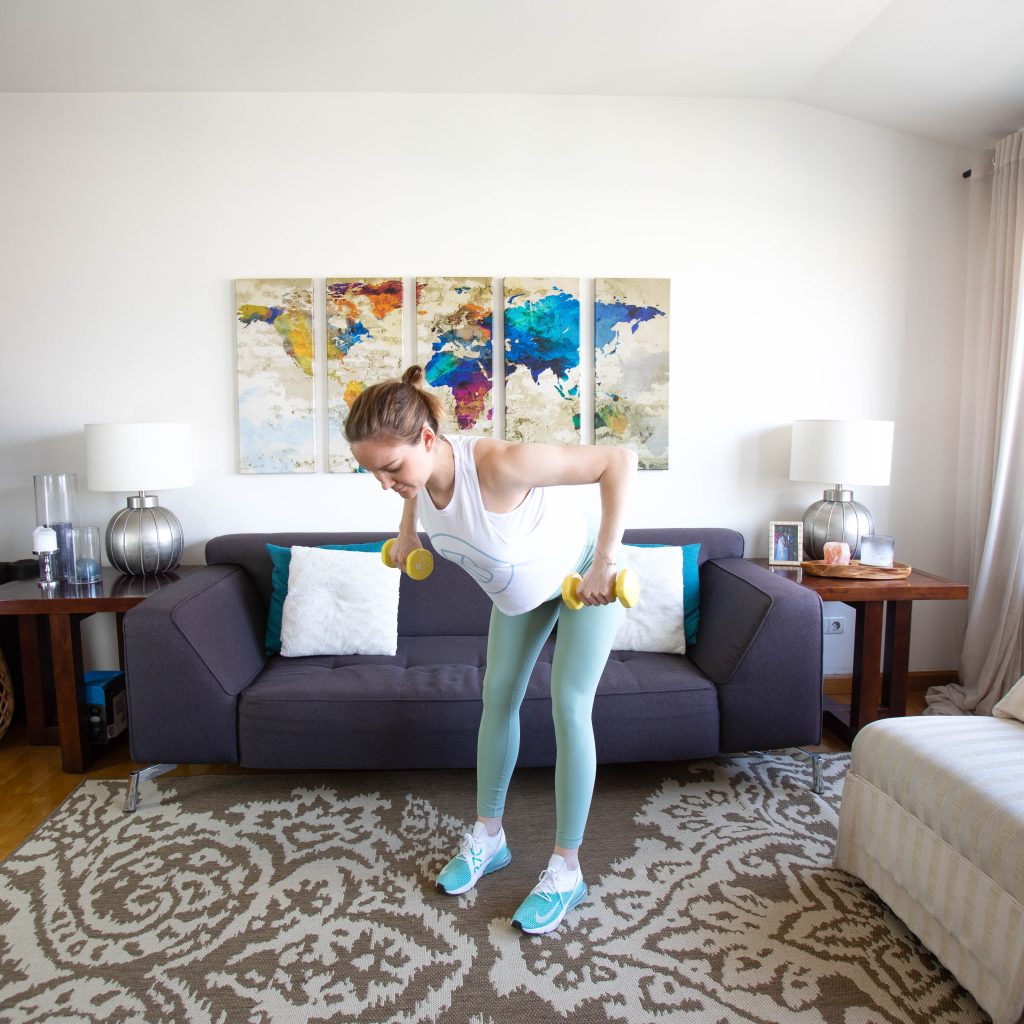 3. Kneeling Pushups, 3-4 sets of 10-12 reps.
Yes, I said kneeling. Unless your form is impeccable in a traditional pushup (which would mean your chaturanga is probably in pretty good shape), PLEASE drop to your knees for these.

Start with the hands under the shoulders and the hips ahead of the knees. The arms should be a couple inches wider than the shoulders for this. Gently draw the upper ribs back to the core is stable. 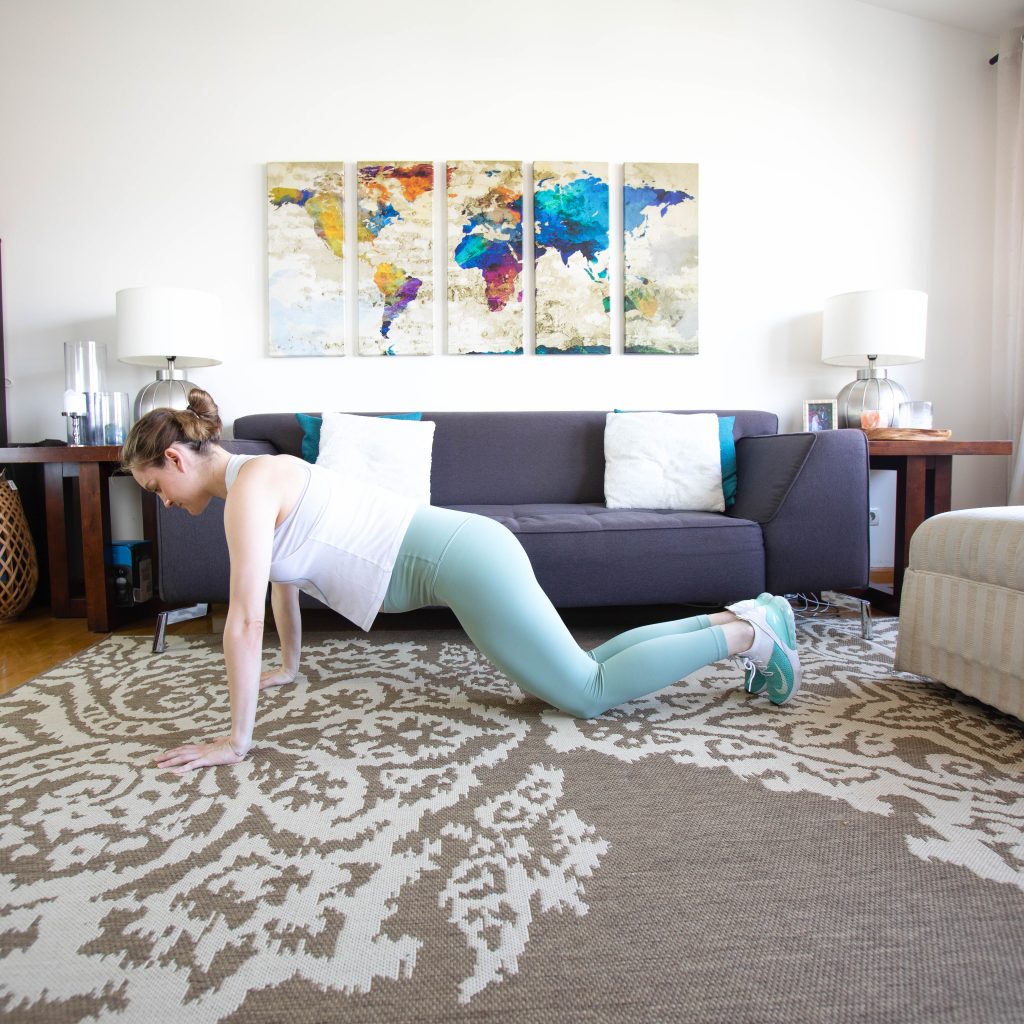 Then, moving the torso in one piece, bend the elbows and lower the torso towards the floor until your elbows bend to 90 degrees. 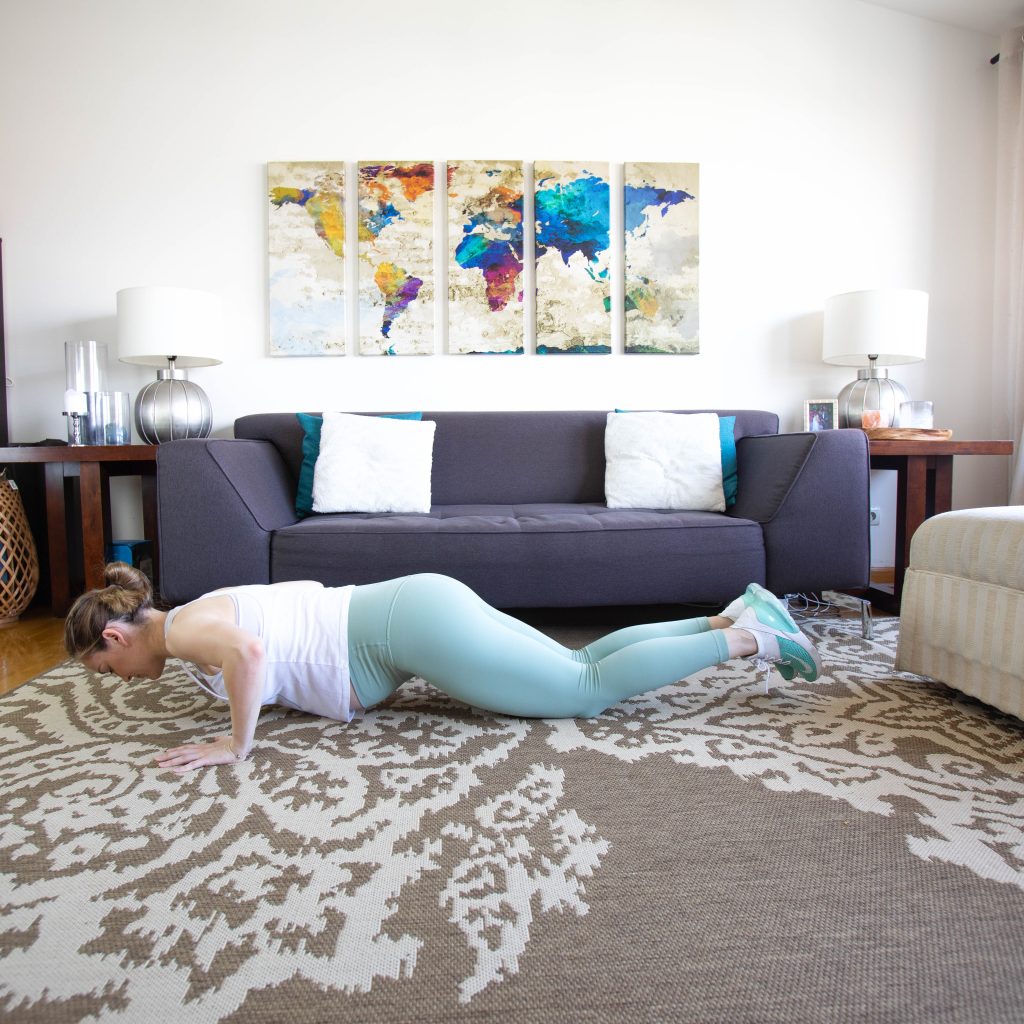 4. Plank, 3-4 sets for 30 seconds to a minute.
I personally prefer a forearm plank when I’m holding this. It feels more stable and doesn’t involve the wrists which is much nicer for most people. But it’s really personal preference.

The elbows should be under the shoulders and the hips and shoulders should be in one line (mine is a bit off because I’m quite pregnant here!). Keep knitting the ribs in towards the back and remember to breathe. A couple things people often get wrong here is pitching the hips up towards the sky– this removes the work in the core. The other thing is letting the hips sag down below the shoulders. This puts a strain on the back. 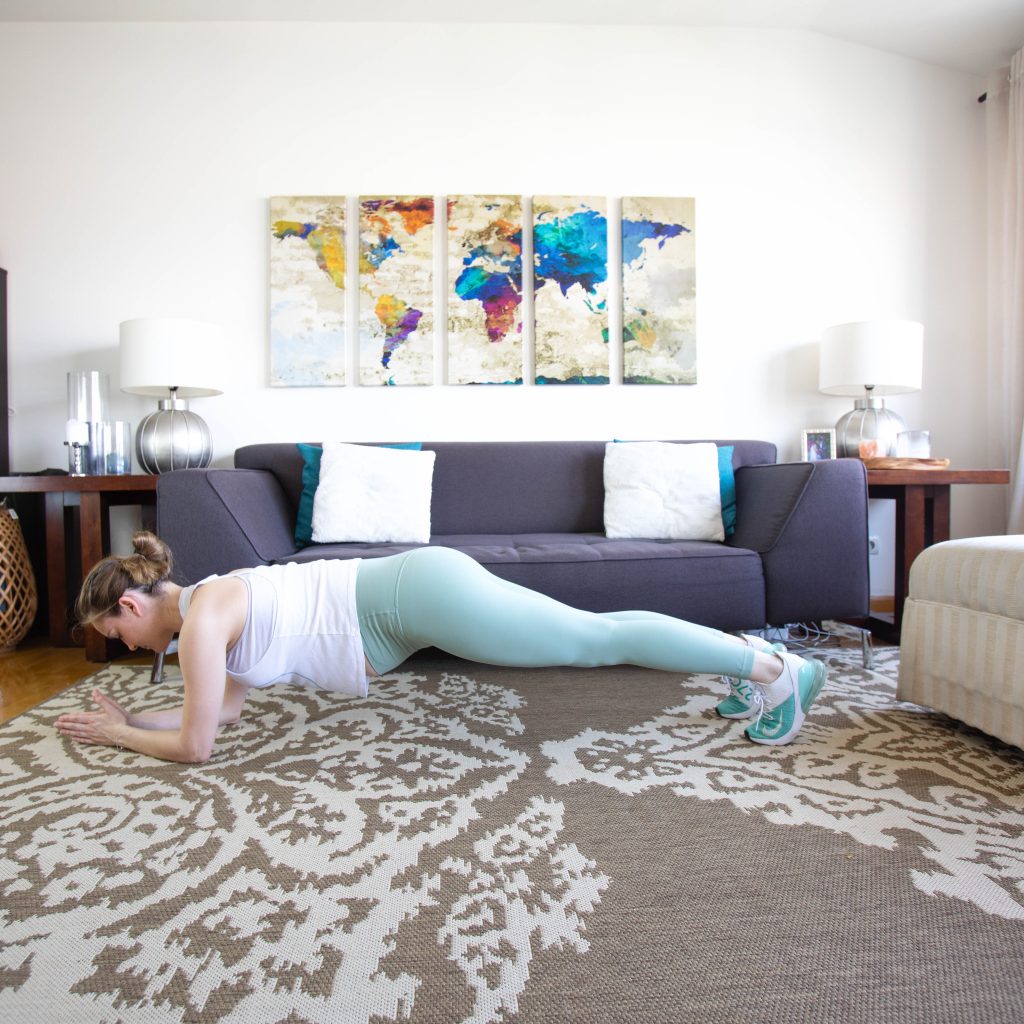