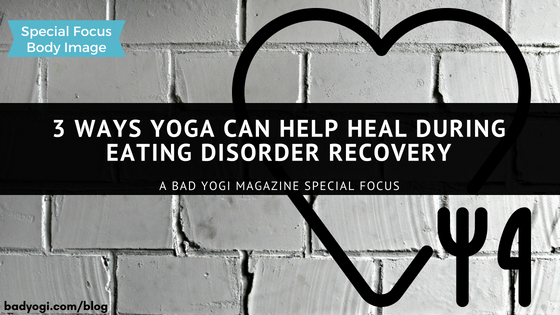 People who suffer from eating disorders often appear healthy on the outside, but issues like anorexia, bulimia and binge eating can take a tremendous toll on the mind, body, and spirit.

The behaviors associated with eating disorders can create a disconnect between the body and mind, but the practice of yoga can help reestablish a connection between the two.

In recent years, yoga has become an adopted complement to more traditional eating disorder treatment models. Similarly to its effects on those who suffer from anxiety and depression, the practice of yoga can help reduce symptoms for those suffering from eating disorders.

Yoga has an emphasis on being present in the moment. This physical and mental experience promotes increased awareness between the body and mind. Through the practice of yoga, eating disorder patients can replace self-harm with self-love in a variety of ways, including:

Self-acceptance is at the heart of yoga. Those who practice yoga learn to gradually shift from critical self-judgement and comparing themselves to others to a growing acceptance of their own capabilities and limitations.

With yoga, those struggling with eating disorders can develop mind-body awareness, something they may have previously lacked due to a disconnection with their body. It can be described as previously living from the neck up, always in their head. But through the practice of yoga, the participant is encouraged to be present in their entire body in a gentle, non-threatening way.

Yoga can help change how someone views their self-worth. Instead of looking in the mirror at your physical appearance, you can close your eyes and look inside yourself. Patients often come to the realization that we are defined by what’s on the inside rather than what’s on the outside.

In addition to the restoration of the mind-body connection, yoga practitioners can experience a sense of calm that enables them to better handle the challenges of daily life.

A Positive Impact on Body Image

The practice of yoga is a great reintroduction to exercise for those with severe eating disorders because it’s not an intense workout designed to burn fat. Yoga focuses less on losing inches and more on losing tendencies of self-harm or self-doubt.

Improvements in body image are attributed to the experience of being present in the body during a session of yoga. There’s also a focus shift from body appearance toward a sense of respect and appreciation for their physical abilities. It demonstrates that one doesn’t have to be athletic to practice yoga. Everyone has their own personal and unique experience, just like with treatment and recovery.

Those who suffer from eating disorders often create a disconnect between these three aspects of themselves. Eating disorders can be quite damaging to a person’s body, mind, and spirit and the practice of yoga can help reconnect all three to create a well-rounded, healthy individual. Like yoga, recovery is a process and may still need to be accompanied by additional treatment such as admittance to a recovery facility, therapy, and group therapy. The ultimate goal of recovery is equally the goal of yoga: to reconnect and integrate all parts of the self to live a more intuitive, peaceful, and soulful life.

Jennifer is a Florida-based writer who strives to raise awareness for mental health and lifelong recovery from substance misuse and addiction. When she isn’t writing, she’s reading a book at the beach or park and playing her with her two pomeranians.